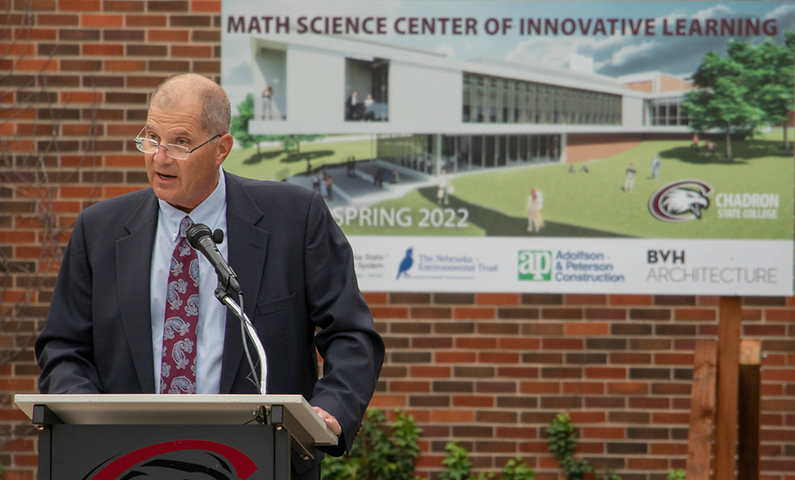 LINCOLN – Chadron State College President Randy Rhine announced today he will retire in June 2023 after completing eighteen years of service to the College and Nebraska. During his 10 years as president of the institution, Dr. Rhine has seen remarkable growth and improvements at Chadron State College.

In a letter announcing his intention to retire to the Chadron State community, President Rhine said, “Together we have achieved a great deal for Chadron State, and I am incredibly proud to see the positive changes that have occurred. I am leaving Chadron State at a time when the institution is poised to move into the future with new energy and opportunity. I cannot thank the faculty and staff of this wonderful institution enough for your efforts that make us a leader in higher education and service to our region and beyond.”

“President Rhine has steadily and skillfully navigated Chadron State College through a period of unprecedented challenges during his tenure,” said Dr. Paul Turman, Chancellor of the Nebraska State College System. “He has done so while staying true to the College’s core values and moving Chadron State forward in its educational purpose. President Rhine will leave the College in a much stronger place than when he arrived.”

“President Rhine’s tenure includes many successes and challenges for higher education, and his vision and commitment to Chadron State College have been unwavering,” said Jess Zeiss, Chair of the Board of Trustees of the Nebraska State Colleges. “My fellow board members and I appreciate his strong leadership and advocacy for the region and the College and join me in offering Dr. Rhine our sincere appreciation for his service to Chadron State.”

Interested candidates can learn more about the position by contacting Academic Search via email at ChadronStatePresident@academicsearch.org.

Information and updates on the Chadron State President search are available here.